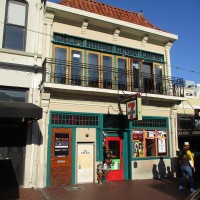 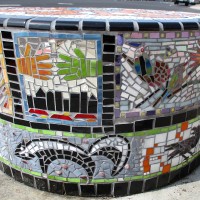 A monument to Montgomery’s achievements stands on the hilltop in the form of a vertical aircraft wing, erected in 1950. Words engraved on a black marble tablet near the wing include:

HE OPENED FOR ALL MANKIND THE GREAT HIGHWAY OF THE SKY

When I researched the early heavier-than-air flights of Montgomery, I noticed there’s a lot of debate about who in the world actually achieved various flying firsts. Some historians assert he made the world’s first “controlled” glider flights. Such as here. “Montgomery should be credited for the invention and demonstration of the 1st controlled glider flight, and patented hinged surfaces at the rear of the wing and a patent for the parabolic wing…“

According to Wikipedia: “In the early 1880s Montgomery began studying the anatomy of a variety of large soaring birds to determine their basic characteristics, like wing area, total weight and curved surfaces. He made detailed observations of birds in flight, especially large soaring birds such as eagles, hawks, vultures and pelicans which soared on thermals near San Diego Bay…In the 1880s Montgomery…made manned flight experiments in a series of gliders in the United States in Otay Mesa near San Diego, California. Although not publicized in the 1880s, these early flights were first described by Montgomery as part of a lecture delivered at the International Conference on Aerial Navigation at Chicago, 1893. These independent advances came after gliding flights by European pioneers such as George Cayley’s coachman in England (1853) and Jean-Marie Le Bris in France (1856). Although Montgomery never claimed firsts, his gliding experiments of the 1880s are considered by some historians and organizations to have been the first controlled flights of a heavier-than-air flying machine in America or in the Western Hemisphere, depending on source.“

Today, the Montgomery Memorial‘s 93-foot airplane wing juts vertically into the sky at Montgomery-Waller Community Park, which is located at the northeast corner of Coronado Avenue and Beyer Boulevard in Otay Mesa West. The silver wing is from a World War II Consolidated Aircraft B-32 Dominator heavy bomber. It’s an impressive albeit somewhat peculiar reminder of how aviation technology continues to progress.

Montgomery-Gibbs Executive Airport in San Diego, one of the busiest airports in the United States for small aircraft, was once called Montgomery Field, named after the aviation pioneer.

When humans eventually land on Mars, and spread outward into the Solar System, it should be remembered that we made one of our first flights from a hilltop in San Diego.

One thought on “Monument in Otay Mesa to aviation pioneer Montgomery.”