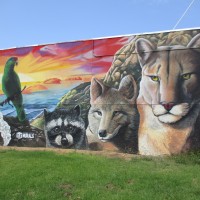 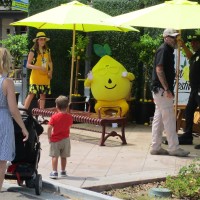 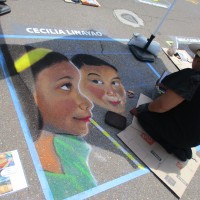 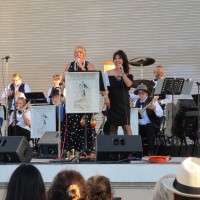 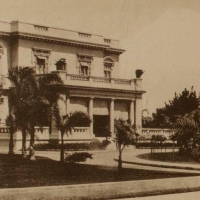 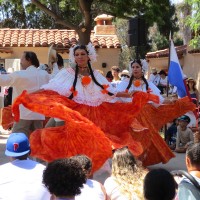 Should you walk from the parking lot by Birch Aquarium at Scripps Institution of Oceanography to the popular attraction’s entrance, you’ll see what looks like a small submarine. On its side is written Star III.

Star III is actually a submersible that was used for undersea studies back in the mid-20th century.

I looked at the cool little marvel of technology and wondered about its history.

A nearby sign provides interesting information concerning the submersible, which was built by General Dynamics.

When I got home, I found a book published in 1968 by the Naval Oceanographic Office titled Undersea Studies With the Deep Research Vehicle Star III which you can preview here. It concerns a series of 21 dives off Key West Florida in March 1967…to evaluate the Star III system as a platform from which to conduct underwater photogrammetric and various surveying tasks.

I also found the following old public domain photograph of Star III suspended above the water from a seagoing vessel.

Lots of fascinating activity today at the Maritime Museum of San Diego!

As I walked about, I noticed volunteers and sail crew members were working on several very different vessels in the museum’s world-famous collection.

Sparks were flying from the black sail of the B-39 Soviet-era Russian submarine. Its life, sadly, has come to an end. Preparations are underway to tow the badly rusted Foxtrot-class diesel electric submarine to Mexico where it will be scrapped.

After watching guys using a torch on the sub’s outer hull, I walked to the far end of the Maritime Museum’s barge where the Robert Sharp’s stern was being restored. A friendly worker with a heat gun was crackling old varnish, which was then scraped off.

When I stepped onto the deck of the historic steam yacht Medea, I noticed a woodworker carefully repairing the boat’s wooden rail where it had split.

The elegant Medea has a fascinating history.

Did you know that, in addition to Medea being a pleasure yacht that cruised the isles and lochs of Scotland, it was used by France during World War I, and by the British Royal Navy and Norwegian Navy during World War II?

I learned something interesting this morning!

I was walking along the Embarcadero past the Maritime Museum of San Diego when I noticed the hull of their badly rusting old Soviet Foxtrot-class submarine, B-39, was partially wrapped with orange material. I asked at the ticket booth for the latest news concerning this historic Russian sub, and I was told it’s being prepared for one last journey. It is to be towed away from the museum next month.

During the Cold War this particular diesel electric submarine, which was commissioned in the 1970’s, might have lurked at times off the West Coast, tracking United States Navy ships. Its final destination will be the Pacific Ocean off Ensenada, Mexico. There it will be sunk to create a new underwater reef!

Oh, the perils of a blogger whose website, through mysterious algorithms, is considered by some a news site. I make a lousy journalist!

The gentleman I relied on for the preceding information was only partially correct–and very wrong concerning the main matter. The submarine will indeed be towed to Ensenada (at an as yet unknown time) to be disassembled for its valuable metal components. But will it become a reef? I’m told, no.

I heard this a couple days later from a much more reliable source during another visit to the Maritime Museum.

I also took the following photographs. You can see strips of orange safety fence wrapped around a portion of the rusted outer hull.

A sign posted on San Diego’s Embarcadero near the Maritime Museum of San Diego indicates their Russian Foxtrot Class attack submarine B-39 has continued to rust, causing the historic vessel to near the end of its life.

A storm this winter that tore away sections of the outer metal skin has accelerated the submarine’s degradation. I believe it was the storm that I recorded back in January here. You can see waves in usually calm San Diego Bay breaking against the submarine.

It’s hoped that as the COVID-19 pandemic subsides, museum visitors will have one more chance to take a look inside the B-39. I learned that once the submarine has reached the end of its life, it will likely be taken to a shipyard to recover whatever might be salvageable. I also learned the Maritime Museum has thoroughly recorded the interior of the vessel, to preserve a very important part of Cold War history.

Learn more about this submarine by checking out the museum web page concerning it here.

I enjoyed a self-guided tour inside the Foxtrot-class submarine nearly five years ago, and posted some interesting photographs. If you’d like to see them, click here.

A fantastic exhibit recently opened at the Maritime Museum of San Diego. You’ll find it aboard their B-39 Foxtrot-class Soviet submarine. The exhibit, using videos, a light show and other exciting effects, tells the story of how one man likely saved the world.

At the height of the Cold War, during the Cuban Missile Crisis in 1962, a Soviet commander on the B-59, another Foxtrot-class submarine, spoke a few cautious words. Those words might have averted World War III and worldwide nuclear destruction.

The B-59 was one of four Soviet submarines that were sent to the Caribbean Sea to support ships delivering arms to Cuba. In October of 1962 the B-59 was detected by the United States, and Navy destroyers began dropping the sort of depth charges that are used for training–practice depth charges with very little explosive impact. It was the US Navy’s intention to have the sub surface in order to gain positive identification.

Aboard the B-59, however, batteries were running critically low, the air-conditioning had ceased working, and if the submarine didn’t surface eventually the crew would perish. They hadn’t had radio communication with Moscow for several days. The captain of the submarine, Valentin Grigorievitch Savitsky, believed that war had probably begun. He wanted to launch their T-5 nuclear torpedo at the USS Randolph aircraft carrier.

The exhibit inside the Maritime Museum of San Diego’s Foxtrot-class Soviet submarine allows visitors to relive those tense moments. They’ll hear how sub-flotilla commander Vasili Arkhipov, also on the B-59, reasoned that a conflict might not have started, and that firing their “Special Weapon” nuclear torpedo would certainly result in World War III. His calm words of council prevailed, the sub surfaced peacefully, and today visitors to the museum can appreciate his level-headed wisdom, and the extreme pressure that the crew of the B-59 felt on that fateful day.

Anyone visiting the exhibit should be prepared for very close quarters. Ducking and engaging in a variety of pretzel-like contortions while moving along the length of the submarine, one can appreciate how life must have been as a crewmember, even under normal circumstances. It’s definitely not a place for those who have claustrophobia!

Here are a few photos that give you a taste of what you’ll experience. Of course, enjoying the exhibit in person is a thousand times more interesting!

You can easily explore Cool San Diego Sights by using the search box on my blog’s sidebar. Or click a tag! There are thousands upon thousands of fun photos for you to enjoy!

Anyone can tour the Dolphin when visiting the Maritime Museum of San Diego. The museum, located downtown on the waterfront, is home to a world-class collection of unique and historic ships.

I personally know very little about submarines. My descriptions come from various signs and a little searching performed on the internet. If you spot an error or would like to provide some info, please leave a comment at the bottom of this post!

The above Maritime Museum display includes the following information:

On November 24, 1968, barely two months after commissioning, the USS Dolphin dove to a depth in excess of three thousand feet to become the world’s deepest diving submarine…this record still stands today. The following year, in August 1969, the Dolphin achieved another world record by launching a torpedo from a depth never equaled by another submarine.

Built exclusively for research, Dolphin is responsible for many achievements. Most significant among these is her unique deep diving capability… Employed by both Navy and civilian researchers, she is equipped with an impressive array of instruments that can support multiple missions…. She is currently configured to conduct extensive deep water acoustic research, oceanic survey work, sensor trials, and engineering evaluations.

…With her decommissioning on January 15, 2007, the United States retired its last active diesel-electric submarine.

Crew compliment: 3 officers, 18 enlisted, 4 scientists (46 crew, all are not deployed)

Operational endurance: Over 15 days (for long deployments, Dolphin can be towed at 9-10 knots)

Development of a Laser Imaging system of photographic clarity

Evaluation of a possible “fifth force of nature”

This sign inside the submarine answers some common questions and includes the following fascinating facts:

When she had her torpedo tube installed, Dolphin could carry four torpedoes… After initial tests and the launch of a torpedo in 1969 from the deepest depth ever recorded, Dolphin was refitted for other research purposes, and never carried torpedoes again.

There are no visual viewing ports in this submarine…. Dolphin did carry imaging electronics for observing the bottom.

Dolphin did not have any claws for picking items off the seafloor as she was restricted to a minimum altitude of fifty feet above the bottom. One experiment launched an ROV (remote operated vehicle) with power and communication cable attached to Dolphin while submerged…

On May 21, 2002, the room below was the center of heroic action to save the submarine and crew. On that day, Dolphin was conducting training exercises about 100 miles off the San Diego coastline when a torpedo shield door gasket failed, and water began to flood the submarine…

Chief Machinist’s Mate (SW) John D. Wise Jr., realizing what needed to be done, dove into the 57 degree water of the flooded pump room…with less than a foot of breathable space…he aligned the seawater valves and then remained in the pump room for more than 90 minutes…

For his courageous efforts, Chief Wise was awarded the Navy and Marine Corps Medal.

At NTC Liberty Station, the 52 Boats Memorial remembers the sacrifice of these men.

The unique memorial runs along two beautiful walkways, and consists of 52 American Liberty Elm trees, 52 flags and 52 black granite markers.  The history of each submarine and the names of lost crew members are recounted for future generations to remember.