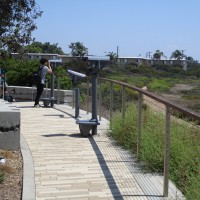 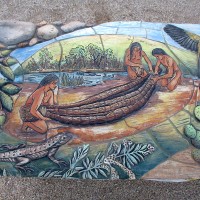 One of the best places to watch super high speed boats racing in Mission Bay during San Diego Bayfair is from a bridge!

The Ingraham Street bridge on the south side of Vacation Isle provides a view of the race “docks” located south of Ski Beach, the tower near the Bill Muncey Memorial, and the entire oval race course. The farthest end of the course is in the distance, but the height provides a great panorama of all the action! And it’s free!

Today during a walk around Mission Bay I paused for a good hour on the Ingraham Street bridge to watch several classes of boats compete, including the H1 Unlimited hydroplanes, which are the fastest racing boats in the world. Mission Bay, which was originally designed for thunderboat racing, is said to be the fastest such course in the world.

As the super fast boats turned corners, huge plumes of white spray would rise up behind them!

I and a small crowd of pedestrians and bicyclists who were watching from on high gave a conciliatory shout out to one racer below who had to be towed in to the docks when his engine conked out. He must’ve heard us, because with good humor he threw up an arm in acknowledgement.

It was fascinating to see how boats would be placed into the docks with three large cranes, then removed from the water and hosed off at the end of each race. During the racing, other boats would be prepared, testing their engines. Everywhere I looked there was interesting activity.

I guess next year I’ll have to get a ticket and check out the action up close!

Here are my photos from various spots on the bridge…

The short but incredibly scenic Coast Walk Trail in La Jolla winds along the Pacific Ocean from the Cave Store on Coast Boulevard to Torrey Pines Road. You can find it by walking east up the hill from La Jolla Cove. Google Maps shows the trail.

Should your feet move down the Coast Walk, heading east, a short distance beyond rocky Goldfish Point, these photographs provide an idea of the breathtaking views you’ll likely experience…

One last blog post from my Mission Bay adventure yesterday!

Loving the fresh air, I walked out onto the narrow jetty at Hospitality Point. To my left, beyond the San Diego River, I saw families and their playful dogs at Ocean Beach. To the right, I saw sailboats navigating out of the Mission Bay channel toward the Pacific Ocean. A couple was paddling kayaks nearby. Several guys were fishing from the rocks. Bicyclists also headed down the jetty.

I didn’t notice until I’d taken many photographs that the inside of my camera’s lens had fogged up! But I did capture some decent images. Hopefully you get an idea of what it’s like to walk out on the jetty on a summer Sunday afternoon.

A bright watery world stretches all around you. 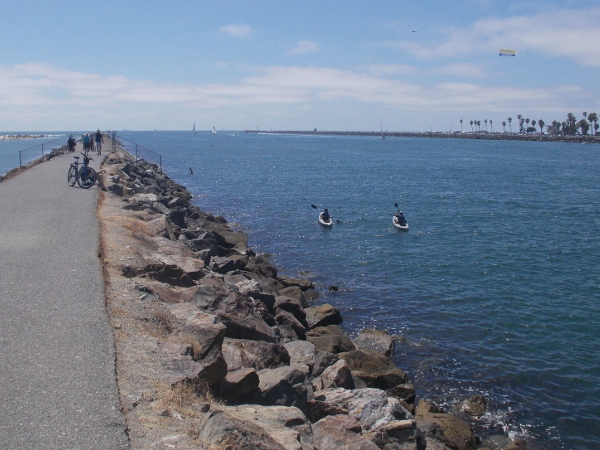 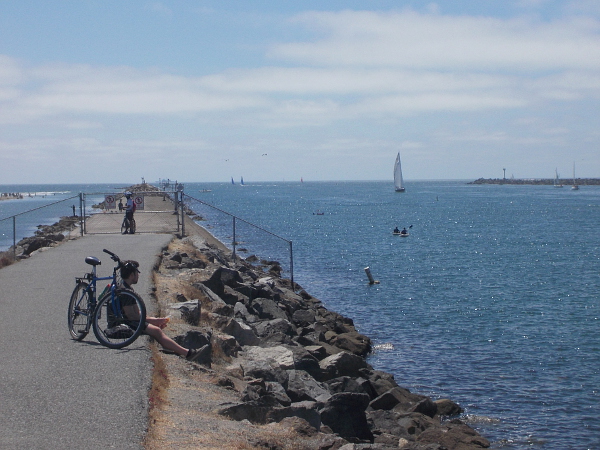 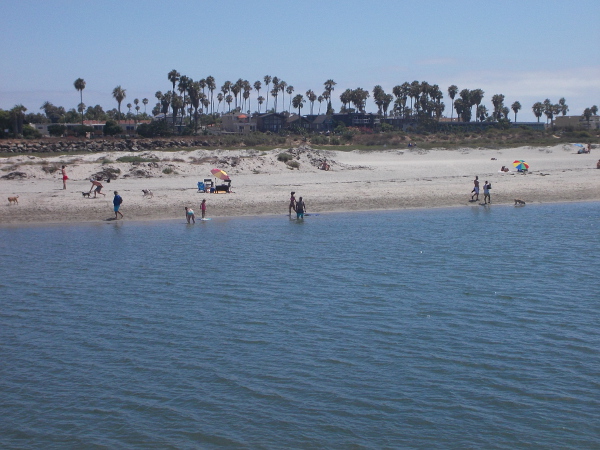 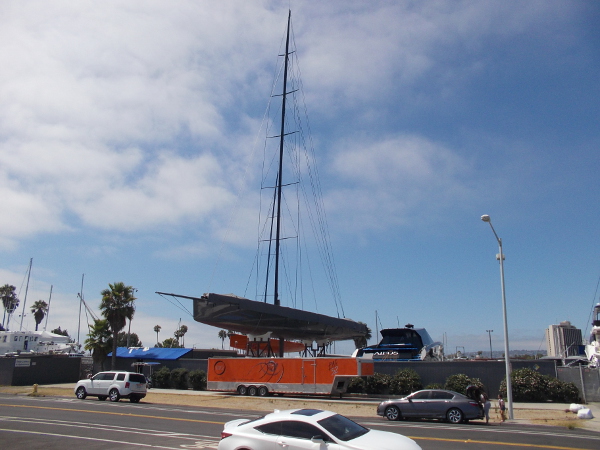 Look what I saw as I walked past the Driscoll Mission Bay Boat Yard yesterday. A gigantic sailing yacht, suspended way up in the air!

That towering mast appeared about as high as a five-story building!

How did that enormous boat get up there? 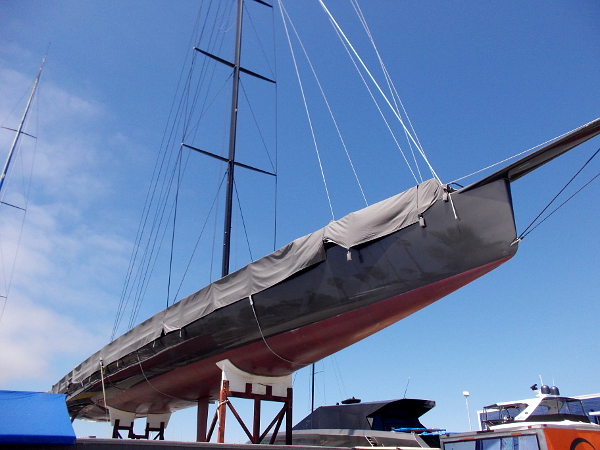 Today I enjoyed a long walk from downtown San Diego to Liberty Station then back again. It felt so good to be near the water that I even took a short detour to visit Harbor Island.

Given the current coronavirus pandemic, I noticed an unusual number of people out on San Diego Bay, on paddle boards, in kayaks, breathing in the healthy fresh air. There’s a new local regulation that recently went into effect during the COVID-19 crisis. People are now allowed to recreate on the water. And those engaged in safe social distancing aren’t required to wear face coverings. They can fully enjoy San Diego’s watery paradise.

As I arrived at Liberty Station, I noticed many stand up paddleboarders embarking on a journey from the boat channel. They headed under the Nimitz and Harbor Drive bridges and into the sunlit marina behind Harbor Island.

The 15th Annual San Diego Dragon Boat Festival was held today in the Tecolote Shores North part of Mission Bay. This cool event is presented by the San Diego Alliance for Asian Pacific Islander Americans. Twenty two wild races on the water saw competition between amateur dragon boat teams from all around our region and nation. 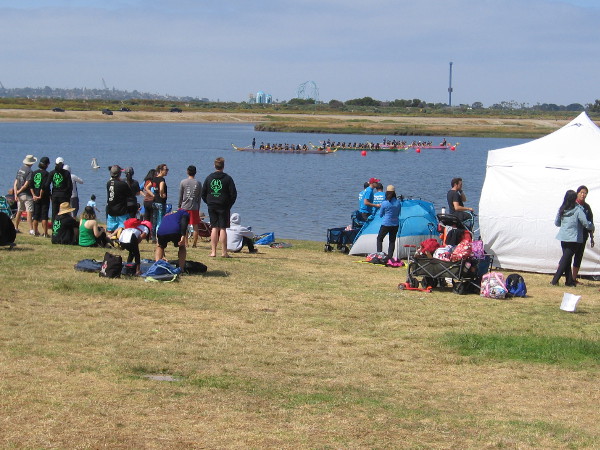 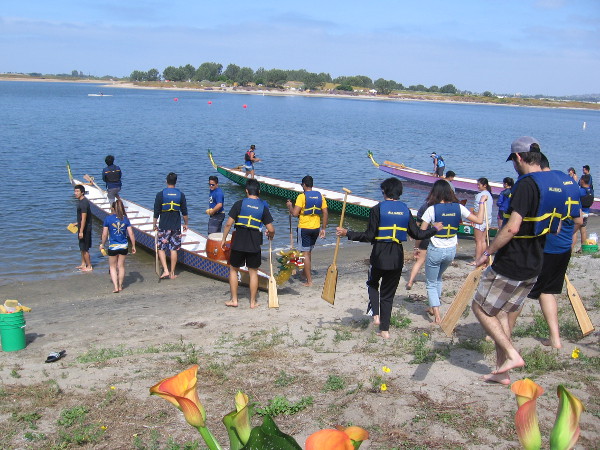 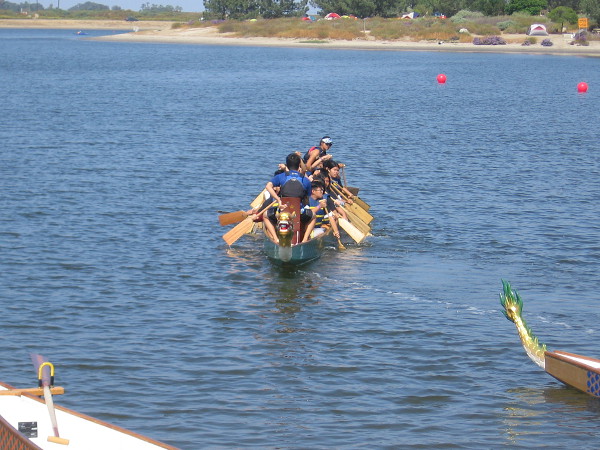 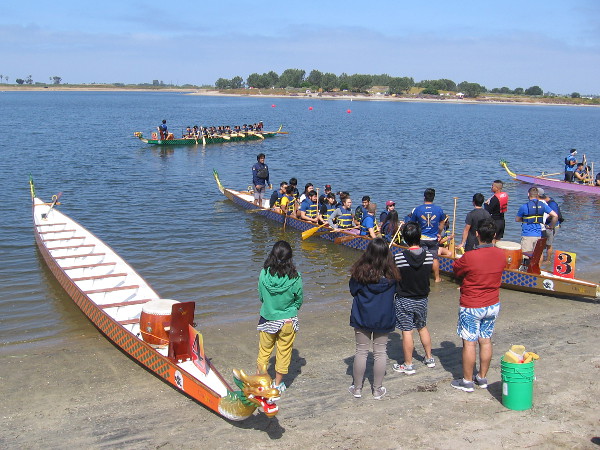 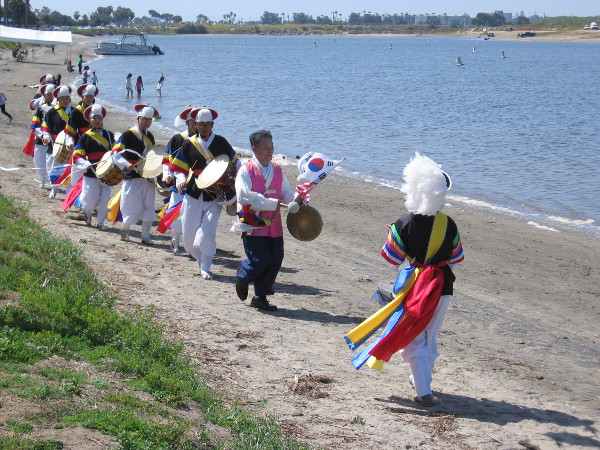 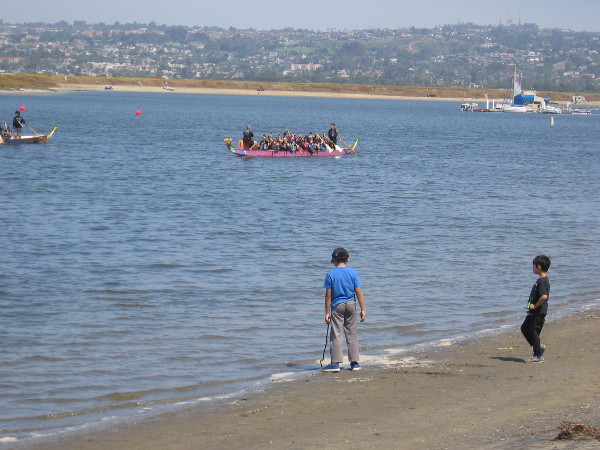 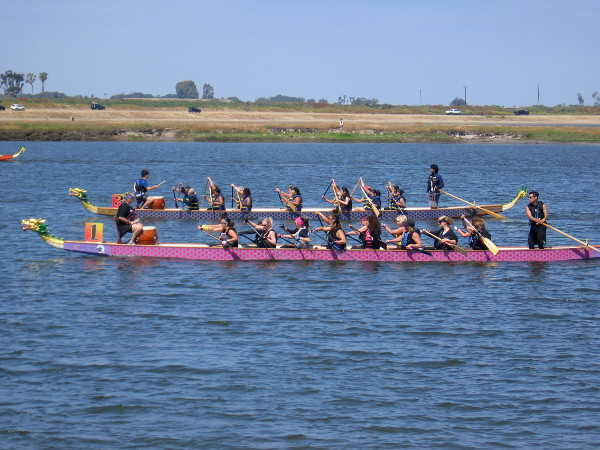 This weekend the general public has the rare opportunity to take a free tour aboard a brand new United States Coast Guard cutter! The USCGC Benjamin Bottoms, which is scheduled to be commissioned in San Diego this week, is presently docked on the Embarcadero just north of the Maritime Museum.

USCGC Benjamin Bottoms (WPC-1132) is a Sentinel-class or Fast Response cutter that has very advanced capabilities. The vessel will be based in San Pedro and will spend most of its time off the coast of Southern California engaging in maritime rescues, drug interdiction, and a variety of other missions.

I stepped aboard today and was greeted by smiling crew members, heroes who have saved the lives of many. I was permitted to take photos everywhere but inside the pilothouse, which contains the latest technology. I was told that almost everything on the cutter is computerized, with sensors and controls just about everywhere. This type of cutter is unique in that it is equipped with a bow thruster which allows for very nimble maneuvering.

After checking out the pilothouse, our tour headed to the rear of the cutter where a small Cutterboat – Over the Horizon inflatable boat can be quickly released into the ocean or pulled back aboard. With its jet drive, the cutterboat has the ability to pursue and overtake very fast vessels.

We then went inside the Benjamin Bottoms to see its galley, a central dining and meeting area, and some officer quarters.

When you take a tour of the vessel, a friendly crew member will also tell you how the ship got her name. To summarize, using the words of Wikipedia: “Benjamin Bottoms was a United States Coast Guard radio operator who died while attempting to rescue the crew of a USAAF bomber that had crashed-landed in Greenland in November 1942.”

Head down to the Embarcadero tomorrow between 9 am and 2 pm and enjoy a fascinating tour and say Thank You to some genuine heroes! 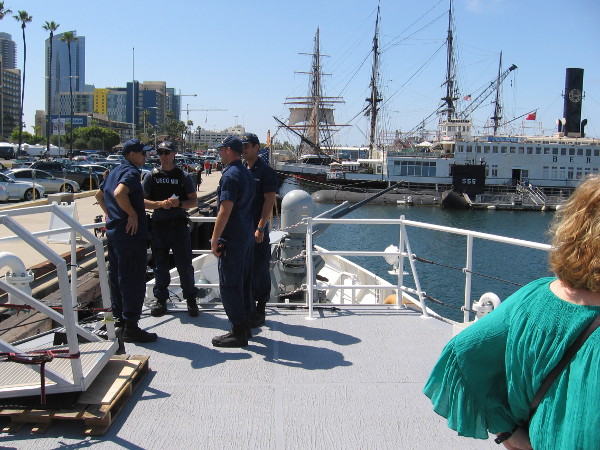 Early this morning I headed to Ski Beach Park, on Vacation Isle at the center of Mission Bay. I wanted to take photographs of a dramatic post-storm sunrise, and people out on the silver water rowing to cure breast cancer.

If you want to learn more about Susan G. Komen’s annual Row For the Cure event, and perhaps watch or participate next year, check out their website here. 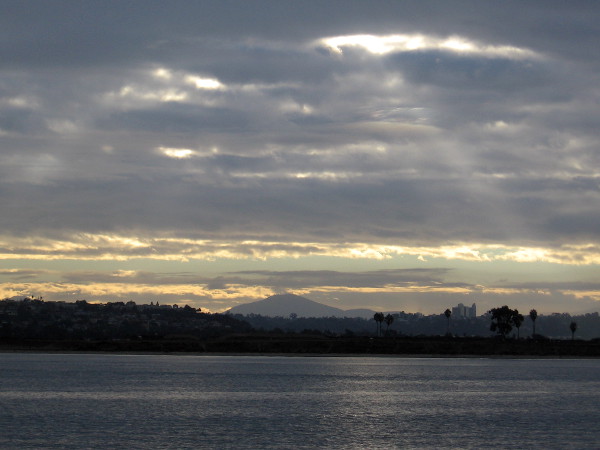 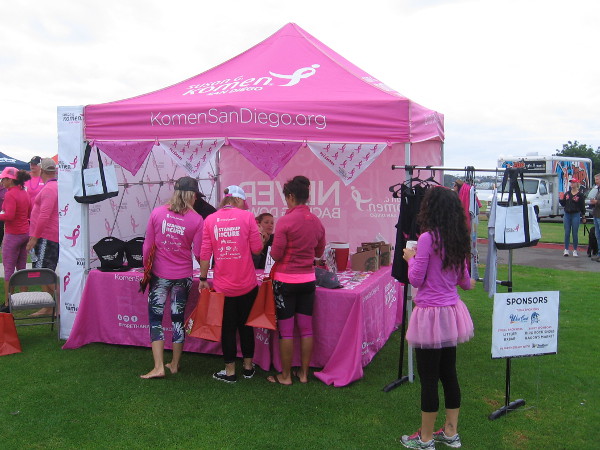 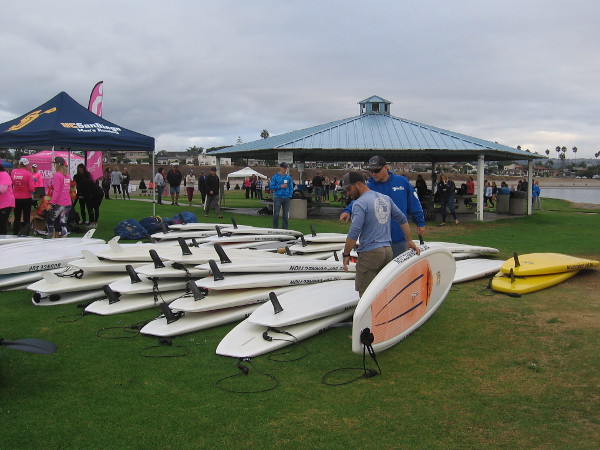 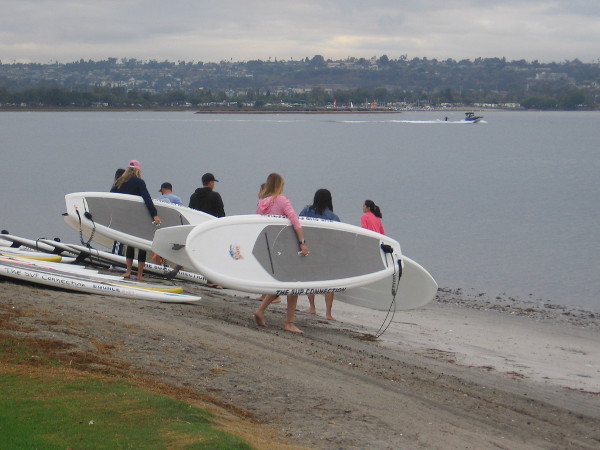 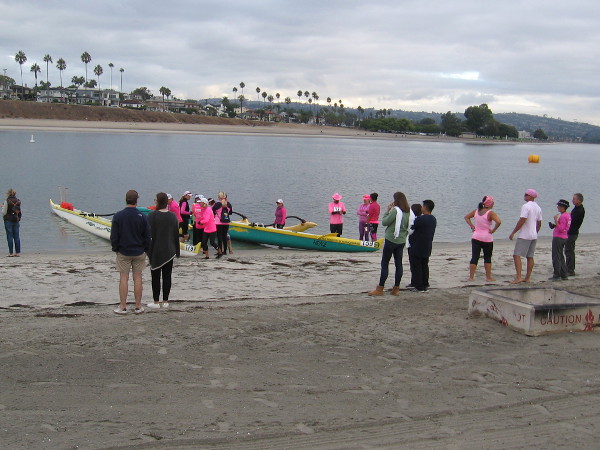 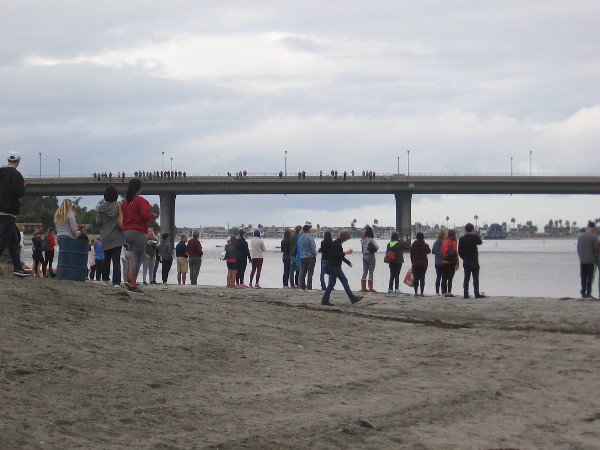 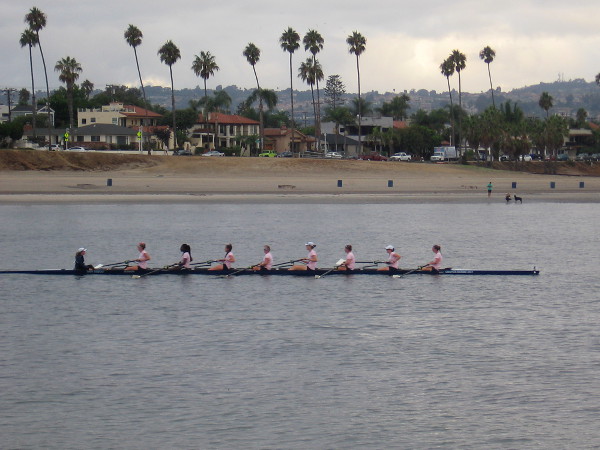 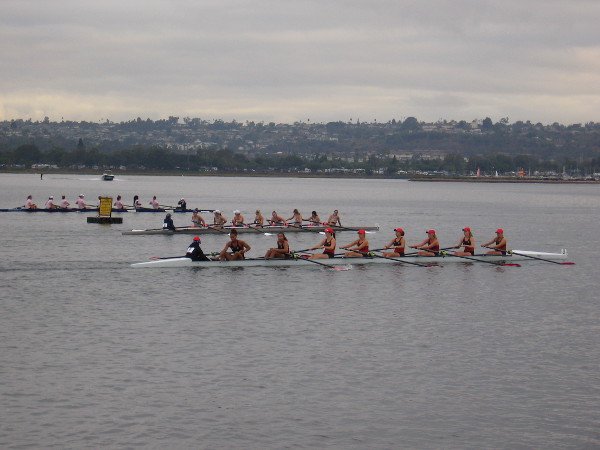 Today I learned about a very cool event!

On Saturday, October 13 people from all walks of life will be rowing and paddling to cure breast cancer! Rowers, canoers, outrigger canoers, dragon boats, kayakers and stand up paddle boarders are all invited!

The 18th Annual Row For The Cure will take place on Mission Bay and benefits Susan G. Komen San Diego. Funds raised will go toward helping those affected by breast cancer, providing education and screenings, and ultimately finding a cure.

This aquatic event on gentle Mission Bay will feature both a beginner’s course and a competitive course. If you don’t own a paddleboard, you’ll be able to rent one on-site.

To learn more or sign up, visit the event webpage here! 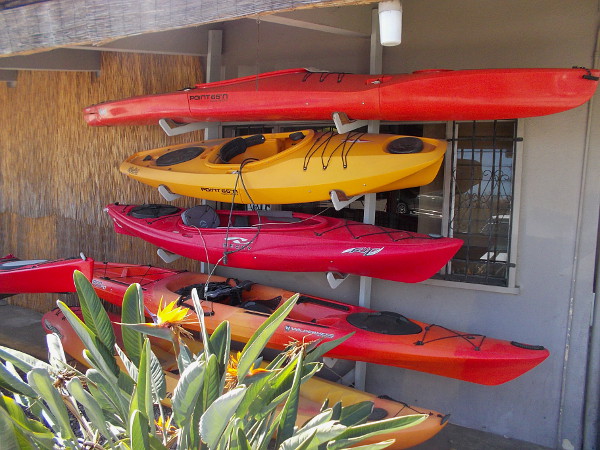 On Saturday I walked slowly along the east side of Mission Bay on my way to the Shaka Fest. Many were out enjoying the sunshine.

This is living in San Diego.