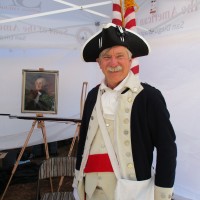 A new exhibition opened a week ago at the Japanese Friendship Garden in Balboa Park. It’s titled The Legacy of Traditional Calligraphy.

The works on display are curated by Befu Osawa, a Master Calligrapher based in San Diego. The history of Chinese and Japanese scripts is shown, along with Kanji letters that are very seldom seen.

The exquisite art of calligraphy has always fascinated me. Particularly when it’s applied to logograms that visually represent words. With careful applications of ink, the meanings of words and written stories are made visible, and imbued with additional dimension.

As a writer whose alphabetical pen strokes are careless scratches, that skillfully added depth makes me jealous!

If you love calligraphy, head over to the Exhibit Hall at the beautiful Japanese Friendship Garden. This exhibition continues through July 23, 2022.

Curious eyes can make many interesting discoveries during a walk around the Oceanside Civic Center.

The last time I visited the beautiful Civic Center, I happened to notice a sign and a plaque that honor two of Oceanside’s sister cities: Pago Pago, American Samoa, and Fuji, Japan.

It might seem odd that Pago Pago maintains a close relationship with a city in Southern California, but Oceanside boasts one of the largest Samoan populations in the United States. Why? American Samoa has the highest rate of military enlistment of any U.S. state or territory. A large number of Marine Corps recruits are subsequently based at Camp Pendleton, Oceanside’s military neighbor.

Fuji, Japan has one sister city: Oceanside. The relationship was established in 1991. Fuji is located at the foot of tall, scenic Mount Fuji, one of Japan’s Three Holy Mountains.

The Coronado Historical Association’s Museum of History and Art presently features an exhibit titled Uprooted: The Story of the Japanese Americans of Coronado.

I visited the museum yesterday. The kind lady at the entrance allowed me to take a few photos when she learned I’m a blogger.

As I stepped into the first gallery, I was immediately pleased to see that the Japanese Friendship Garden in Balboa Park had contributed objects for display, including beautiful kimonos. I’m a member of the garden.

Then, as I looked at old photographs and read descriptions, I was stunned to learn that Coronado once had its own Japanese garden! Actually two tea gardens! And the second would be the setting for four motion pictures from 1913 to 1919!

Looking at the exhibit’s many historical photographs, I tried to imagine what life on the island might have been like years ago, particularly for Japanese Americans. The years covered are from the mid-1800’s when immigrants came to California seeking opportunity, to the forced detention of Japanese American citizens during World War II, to more recent and optimistic times.

Many of the displays are made possible by the Japanese American Historical Society of San Diego.

Anyone interested in local history absolutely should visit this exhibit. I was surprised to learn so much!

More information can be found on the Coronado Historical Association website here.

How would you illustrate your own memories?

An exhibition of art at the Japanese Friendship Garden in San Diego’s Balboa Park features the “memories” of graphic designer Shuichi Hashimoto.

Should you walk into the garden’s Exhibit Hall, you’ll discover flowers and mountains and clouds and cities, composed quilt-like from many bright fragments. The exhibit is titled Moisture and Light–Landscape in the Memory.

The inspired creator of this unique beauty, Shuichi Hashimoto, is based in Osaka, Japan. According to the JFG website: Hashimoto believes that the persistent rain combined with the humid environment influenced the diverse culture of Japan.

One can see how streaks of light and drops of water in his artwork seem to shimmer and bubble throughout the bright memories.

As I looked upon these abstract landscapes, it seemed I was peering through windows spattered with sunlit raindrops.

You can experience these fantastic memories, too, at the Japanese Friendship Garden through May 7, 2022.

I walked in the Lower Garden today. I moved slowly down the path that wanders through the grove of Japanese cherry trees, and it was like a dream.

Many souls were wandering among the new blossoms, drinking in nature’s beauty.

JFG’s annual Cherry Blossom Festival is just a couple weekends away, from March 11th to 13th.

Spring with its promise of renewal must be approaching!

A couple months ago I blogged about a big new waterfall that is coming to the Japanese Friendship Garden in San Diego’s beautiful Balboa Park.

Yesterday I swung by again and noticed huge progress has been made creating the waterfall!

The step-like watercourse is being readied. Large boulders have been placed where the water will descend through the Lower Garden to the existing bridge, waterfall and koi pond by the Inamori Pavilion. Many smaller rocks will surely follow.

During a later visit, I noticed stairs are being built in the canyon’s side. They climb beside the waterfall. It appears there will be a viewing area up above!

How does one paint the beauty of a Japanese garden? The answer can be found at the Japanese Friendship Garden in San Diego’s Balboa Park.

“Visual Harmony in Japanese Gardens and the Beauty of Bonsai” is the title of the current exhibition in JFG’s Exhibit Hall.

What I found most interesting are written descriptions he provides of how to create bonsai and Japanese garden artwork. His art is driven by curiosity and passion.

If you’re an artist, you can visit his YouTube channel here. There are various technical demonstrations and lessons concerning Bonsai Drawing!

Just inside the entrance to the Central Library in downtown San Diego stands a life-size model barrack. It accurately replicates barracks that were used to incarcerate Japanese-Americans during World War II.

The model barrack was built by Frank Wada, who was sent to the Poston “Relocation Center” in Arizona, before being released to fight in the war. He was ultimately awarded a Bronze Star and Purple Heart.

In 1942 ten prison camps were built in the United States to incarcerate those with Japanese ancestry. About 120,000 people were imprisoned in these camps. The model barrack shows what life was like for those who were forced to live away from their homes, with little comfort or privacy.

An exhibit in the Central Library’s 9th floor Art Gallery, titled Call to Serve: Clara E. Breed and the Japanese American Incarceration, is on view through January 30, 2022. It documents how San Diego city librarian Clara Estelle Breed was an active opponent of Executive Order 9066, the internment policy instituted by President Franklin Roosevelt in February 1942.

On Saturday afternoon I rode the elevator up to the library’s rooftop to see the exhibition, but for some reason the Art Gallery was closed. I’ll try again in the future!

Whenever I walk through Balboa Park, I almost always spend some time at the Japanese Friendship Garden, even if it’s only for a few minutes.

Today I noticed there’s new artwork on display in the Exhibit Hall. It concerns breaking ocean waves, and includes many images of surfers on surfboards. The art is so vivid and unique, it’s hard to describe.

The exhibition is titled Hokusai Waves. It showcases the work of San Diego photographer Kotaro Moromura, whose images are inspired by Japanese Ukiyo-e painter and printmaker Katsushika Hokusai.

Powerfully curling water and flying droplets, captured with a high camera shutter speed, seem to leap right out of the display cases. The images are not unlike the impressively crashing waves created by artist Katsushika Hokusai.

As you can see from a couple of my photos, the wave images that include surfers are dynamic and definitely very cool!

Anyone visiting San Diego for the next several days for the international World Surf League Championship event up at Trestles might enjoy a peek at these!

The Tanabata Festival was held today at the Japanese Friendship Garden in Balboa Park!

Most importantly, visitors to the festival had the opportunity to write their own special wish!

Tanabata has its origin in a story about the Japanese deities Orihime and Hikoboshi, who shine in the heavens as stars. The Milky Way separates the two lovers who can only meet once a year. Tanabata is that day.

According to the Japanese Friendship Garden’s website here, “A common practice during Tanabata is to decorate the nanatsu kazari, or seven decorations…” Different types of ornaments are hung from bamboo trees to bring luck, skill, health or success.

I noticed many messages had already been hung. The hands of many at the festival wished for happiness in life!