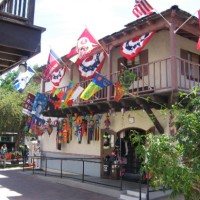 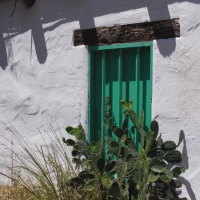 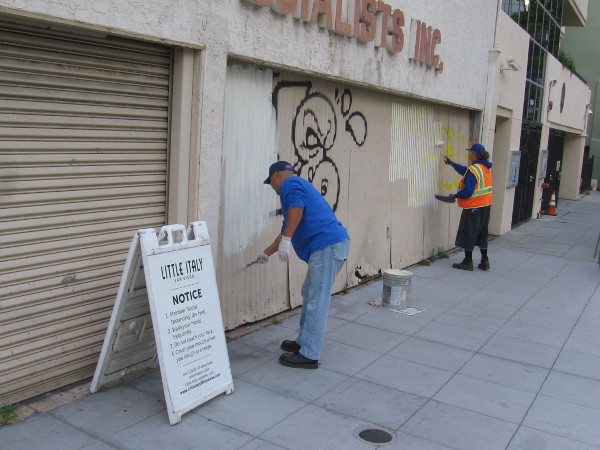 During my walks around downtown, I’ve noticed that vandalism has increased during the current coronavirus lockdown.

The friendly guys painting over the illegal graffiti indicated that because the streets are emptier than usual, those who go about tagging buildings, walls, signs and other targets have become more active, as there are fewer eyes outside who might witness their activity. San Diego has had a substantial increase in the homeless population in recent years, and unfortunately that means gang members who move about the city selling meth and other drugs. I might be a bit naive on such matters, but I reckon at least some of this vandalism is the marking of territory.

In any case, it’s obviously a disturbing and disheartening situation.

I took some representative photographs this morning during my walk through Little Italy and along the waterfront.

Thank you to the unsung heroes–like those guys in the first and last photo–who work tirelessly to make our city not only less ugly, but safer for everyone. 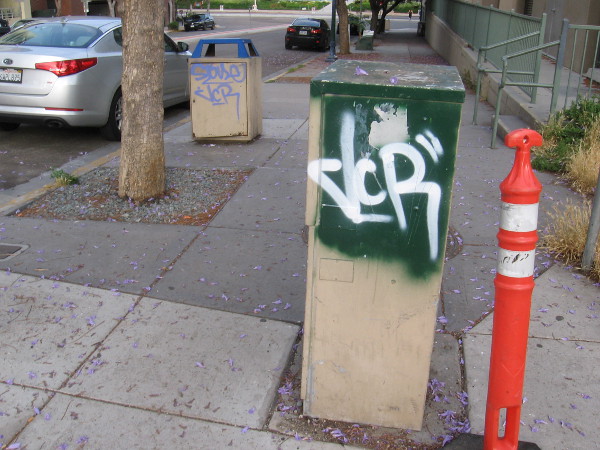 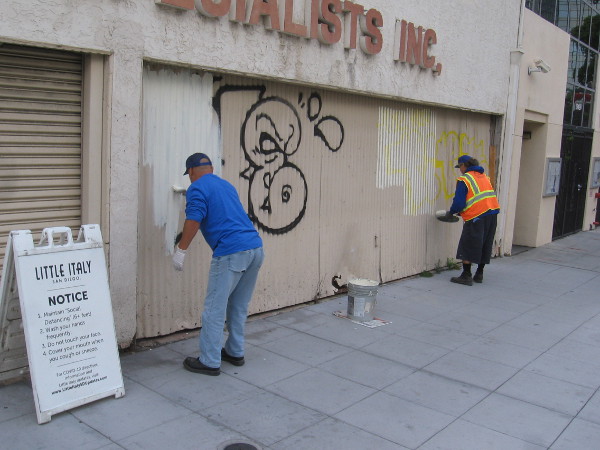 A large mural has been recently painted in a neighborhood that is home to a significant population of at-risk youth. The public mural offers hope, positive reinforcement and inspiration. It reads simply: I AM POSSIBLE.

You can find this powerful new artwork painted at the corner of University Avenue and Marlborough Avenue in City Heights. It’s the creation of @midcitycanyouthcouncil and @channinfulton for #schoolsnotprisons.

For youth who feel trapped, or hopeless, or tempted to go down a self-destructive path, these beautifully painted words provide a constant visual reminder of life’s better possibilities.

I’m not a regular customer of Christine’s Coffee, but I often walk down B Street past the downtown coffee cart, and I’ll grab a hot chocolate on super cold mornings. If Christine happens to see me as I pass by she always smiles and waves. She is the friend of many. She is an important part of the life of our city.

So it was shocking to see a notice on her boarded-up cart about a month ago that explained her cart had been torched by an arsonist. Apparently is was set on fire in the middle of the night by a transient.

A couple days ago I spotted another notice on her destroyed cart. It explains that she has a GoFundMe page, and has plans to reopen the coffee cart.

If you’d like to help Christine, please go to her GoFundMe page here.

Neither an escape room, nor murder mystery dinner theatre, Solve Who offers would-be detectives something far more immersive and realistic. Solve Who is the world’s first interactive crime scene simulator!

Enter the front door of Solve Who and you suddenly become a detective investigating a detailed crime scene using your wits, a notepad and pen, and a variety of forensic tools. Groups of up to ten people operate as a team, collecting clues, watching short video interrogations of three suspects, then deliberating to determine the identity of the murderer.

Questions one might ask during the investigation include: Was the crime premeditated? Who had the motive to commit murder? Was there a break-in? Was there a struggle? What was the murder weapon? Are any fingerprints that you find with an ultraviolet light relevant? What is the meaning of a series of emails that periodically appear on one computer? Is any object at the crime scene out of place?

I was given a little bit of a preview this evening and I must say this entertainment concept is absolutely unique and brilliant! The super friendly guys behind Solve Who have worked hard to make the experience very realistic–they have even worked with law enforcement experts to ensure this fully interactive crime scene simulator is very close to authentic. With some crazy humor injected for fun!

It seems to me that Solve Who would be an ideal place for corporate team building, having a night out with friends, or for simply meeting new people. Right now they offer one scenario titled Murder at PROstate Farm, with three new, completely unique crime scenes to appear in the future. Solve Who will also offer beer and wine to participants in the near future.

Check out the Solve Who website here and perhaps make a reservation. You’ll be one of very few people in the entire world to have experienced a realistic interactive crime scene simulator!

Today I was walking around outside San Diego Comic-Con when I met a real-life superhero. His name is The Nyght. He’s a member of the Xtreme Justice League.

The Xtreme Justice League began in San Diego, but now has superheroes operating around the country. Their primary mission is to help local communities stay safe.

These volunteer superheroes, wearing outlandish protective garb, are highly trained for what they do. They conduct safety patrols in rough neighborhoods and offer a variety of public safety services. They report dangerous activity that they observe to law enforcement. They strive to provide positive role models for at-risk youth. They oppose vigilantism–they believe in compassion, nonviolence, volunteerism and heroism.

They also work to help the homeless.

Tomorrow–Saturday July 21, 2018–members of Xtreme Justice League from all around the country will converge in Balboa Park’s Pepper Grove to help San Diego’s homeless. Their event is from 10:30 am to 2:00 pm. If you’d like to help them out, they accept donations of items such as individual tissue packs, socks, sunglasses, water bottles, sunscreen and sleeping bags.

You can learn more about who the Xtreme Justice League is, and what they do by visiting their website here!

Early this morning I headed to Harbor Island, hoping to capture photos of the sun rising over downtown San Diego. Alas, the sky remained gray and overcast.

Even worse, I observed something that was ugly and very discouraging.

Harbor Island, the home of large bayfront hotels, elegant restaurants and marinas, has always seemed immune from any negative influences from downtown San Diego. Growing homeless and drug problems downtown and in neighboring communities haven’t seemed to reach this tourist destination. That appears to be changing.

I seldom post photos of the street people, the drug addicts and drug dealers on stolen bicycles, and the many broken souls that now fill most corners of downtown. I try to keep my blog positive. But this extremely sad and sometimes frightening reality seems to be growing worse.

Fortunately, on my quiet morning walk along San Diego Bay, I also saw much that was beautiful and good.

And I discovered something cool! Fun photos of some colorful artwork on Harbor Island are coming up in my next blog post! 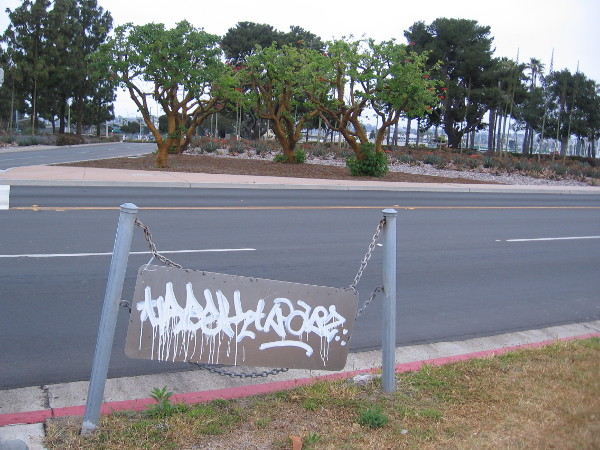