The Mingei International Museum in Balboa Park is currently undergoing a major renovation and expansion. Once completed, this world-class folk art, craft and design museum will be more amazing than ever!

While construction is underway, Mingei’s gift shop and cafe are temporarily located at Liberty Station, in the historic Dick Laub NTC Command Center building. Step through the front entrance and you can’t miss it.

Today I meandered about Liberty Station with no definite destination in mind. I was pleased to happen upon the Mingei’s shop and meet the smiling lady behind the counter. She told me that Niki de Saint Phalle’s fun, kid-friendly Nikigator sculpture, which used to stand in front of the museum in Balboa Park, might be moved out from storage and placed right in front of the Command Center. How cool would that be?

Here are a few photos. The lobby of the Command Center not only features Cafe Mingei, but a collection of great art created by Liberty Station artists! 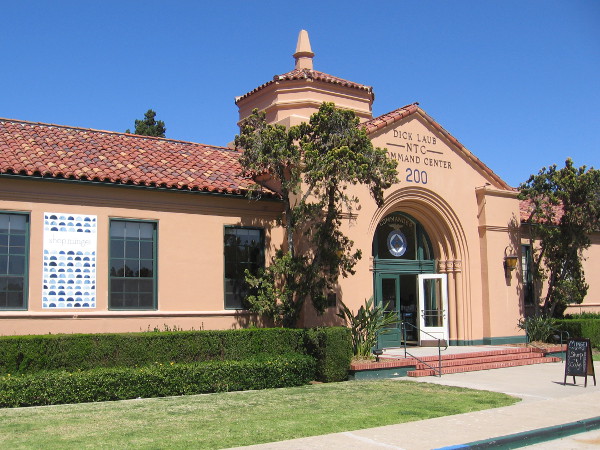 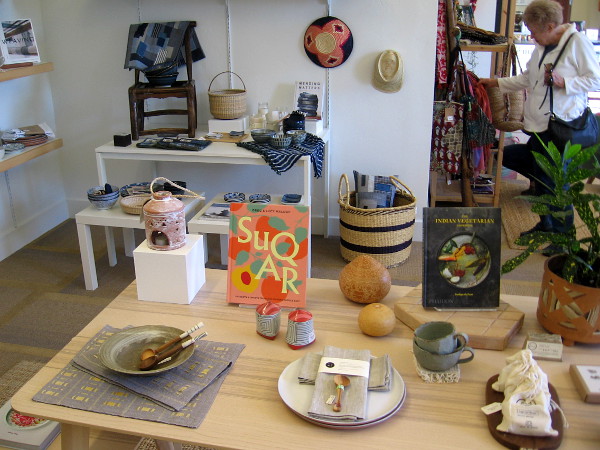 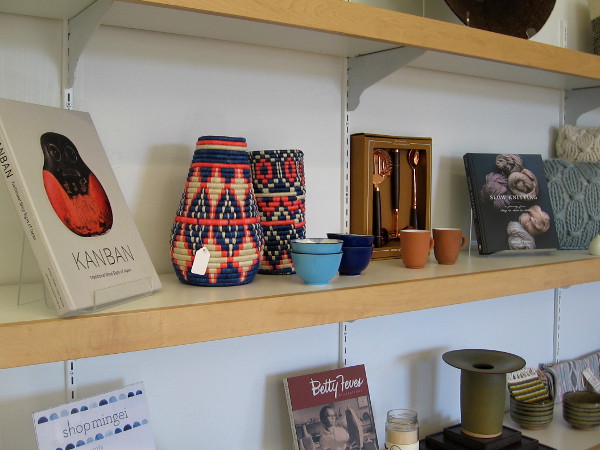 Every so often I drive up Cesar E. Chavez Parkway through Barrio Logan. Recently I noticed that there’s a bunch of new street art decorating electrical boxes at intervals along both sidewalks. So last Sunday I took a walk through the neighborhood to check it out.

The photos of street art on walls, doors and windows you see were taken on Main Street just north of Cesar E. Chavez Parkway. The many electrical boxes were observed along the parkway between Main Street and National Avenue.

As I took those final two photos of the painted dogs Princess and Chato, I was startled by a nearby voice. A gentlemen at the nearby house greeted me from over his fence. I learned many of the boxes along the street were painted by various local artists about a month and a half ago. He was pleased that his neighborhood is getting “cleaned up” and graffiti has made way to all the colorful artwork.

I was also surprised to learn Princess and Chato were actual living dogs! As we spoke, a woman came out of the house proudly holding the two dogs! After I departed, I regretted not asking whether I could take photos of their pets. As you can see, Princess and Chato’s street art portraits are very true-to-life!

Whenever I visit Old Town San Diego State Historic Park, I poke my head into Fiesta de Reyes. The Mexican-themed shops and restaurants are always lively and cheerful, but what I really hope to see is the folklorico dancing!

The colorful dancing takes place daily. Take a look at these photos and smile!

For a few minutes this afternoon, during my walk along the Embarcadero, I relaxed on a bench with a smile on my face. I was tapping my toes listening to some really smart, folksy, bluesy, heartfelt singing accompanied by banjo and harmonica. I was enjoying a performance by Fast Heart Mart!

Please check out Martin’s website. He’s toured all over the world and has opened concerts for a wide variety of musical acts. He has ten albums!

I listened to his original composition titled “Good Lordy, I’m Forty” and laughed out loud. The lyrics are intelligent, humorous and strike a chord! And his voice has a distinctive, edgy but pleasingly authentic sound that I could listen to all day.

You can find many samples of his music on his website. I urge you to pay a visit!

Okay, here’s a quick pic of some rather simple street art. I saw this colorfully painted utility box while walking up Bankers Hill a few days ago.

I love the symbolism in the image. A riot of small uplifting balloons whisking one’s home and carefully controlled life away on a carefree, restoring breeze was a theme that I really enjoyed in the Pixar movie Up!

Tomorrow I’m planning on a long walk. No telling where my legs will take me!

Late this morning I took a long leisurely walk through San Diego’s Old Town, just to check out this weekend’s Cinco de Mayo festivities. Thousands of people had arrived already, and the crowd was rapidly growing!

A carefree walk with open eyes is a feast.  One meanders into endless discoveries.  Even cheap wares on the sidewalk or cart are worth a moment’s attention.

These photos of crafts, curios and colorful clutter were taken during an ordinary walk along San Diego’s Embarcadero.

Street art flourishes on the sidewalks of San Diego. Many electrical transformers and utility boxes have been creatively painted to represent colorful scenes both real and imagined. Most have a primitive or folk art vibe. I’ll snap lots of photos for this blog!

Here’s a box downtown at Sixth Avenue and Elm Street that features an airplane and space shuttle zooming above clouds between planet Earth, the Sun and the Moon. At least, that’s what it looks like to me!