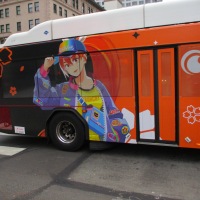 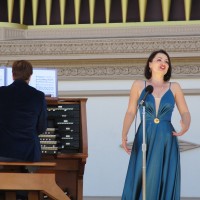 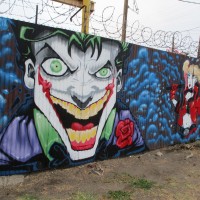 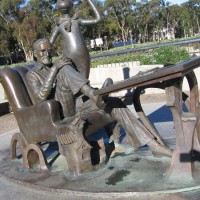 Uniquely beautiful civic centers can be found all around San Diego County. I’ve photographed many of them. But the Oceanside Civic Center might be my favorite.

I walked randomly about the Oceanside Civic Center complex last weekend and was amazed by everything I saw.

As you can see from various plaques I photographed, the original Oceanside Fire Station (also called Oceanside Engine House and Police Station) was built in 1929/1930, and the original City Hall and Library were completed in 1934. They were designed by Irving Gill, a renowned San Diego architect who is now a recognized major figure in the modern movement. His welcoming simplicity, unadorned classic lines and graceful arches have appeared in various places on my blog. His style has been described as cubist. You can see that signature style in these photographs as well. Designing buildings for the City of Oceanside was the final monumental project of his career.

As you can see on another plaque, a City Hall renovation was completed in 1957, and as you can read in this article, a large new Oceanside Civic Center and Public Library were completed in 1990. The large complex “designed by Charles Moore emulated the styling of Irving Gill (with) the white arches and simple architecture…Moore remarked about Gill’s legacy: “We use his plain white walls, his unadorned concrete arcades, disciplined fenestration and flat roofs as our architectural vocabulary, and then allow ourselves the exuberance of bright colors with tiles in niches at the entrances, in the jambs and soffits of deep set openings, and through the contrast of palms and broad-leafed plants surrounding our structure.”

The Oceanside Museum of Art, with its exquisite 1972 Opus sculpture by James Hubbell situated near the entrance, is another beautiful part of the large civic center complex. It occupies the original City Hall.

In the same article, you can read that “After renovation of the interior of building, the Museum of Art opened to the public on October 6, 1997. In 2008, a new addition to the Oceanside Museum of Art was dedicated in 2008. The contemporary, three-level 15,000 square foot addition designed by architect Fredrick Fisher sits alongside the historic building designed by architect Irving Gill, who redefined the architectural landscape of Southern California.”

Should you ever visit Oceanside, California, look for the big colorful fountain at the corner of North Coast Highway and Pier View Way. Then take a stroll through one of the most fantastic civic centers you’re likely to ever see!

During a later visit I took even more photos. The big fountain near the library was off at the time…