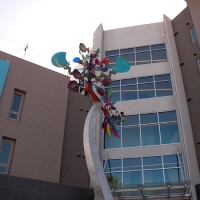 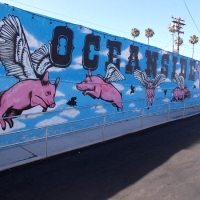 When I walk through downtown San Diego, sometimes I’ll pass through Civic Center Plaza to see if anything new or interesting is going on at the San Diego Civic Theater, or at Golden Hall in the San Diego Community Concourse.

I personally have a fond memory of Golden Hall. It’s where I attended my first San Diego Comic-Con with a school friend who happened to be a huge comic book fan. I believe that was in 1982, because I remember the artist Mike Grell was there, and penciled a free detailed sketch of his creation the Warlord for my friend. Back then the initial Superman and Star Wars movies were huge sensations. Yes, that was many, many years ago!

Civic Center Plaza today contains several cool sights. So far my blog hasn’t included images of the Memorial to Alonzo E. Horton plaque and the impressive Official City of San Diego Seal in the passage under the City Administration Building. So here they are!

(You might recall that in the past I’ve posted photos of the Bow Wave fountain, the terrazzo image in the plaza of Cabrillo’s galleon sailing into San Diego Bay, and the Sister City signs. Not to mention photos of other incidental stuff encountered during walks.)

3 thoughts on “History and some memories in Civic Center Plaza.”