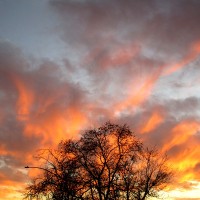 Late yesterday, a few minutes after five o’clock, a violent microburst tore through Mission Valley, several miles north of downtown San Diego. Similar microbursts occurred elsewhere around the city and county, bringing thunder and lightning, torrential downpours and extremely violent winds. San Diegans saw on the news how many small airplanes parked at Montgomery Field in Kearny Mesa (a few miles farther north) were thrown through the air and overturned like mere toys.

I was fortunate. I left the place where I work in Mission Valley half an hour early. Many of my coworkers weren’t so fortunate. One, walking to the Hazard Center trolley station, took shelter in a grocery store while the wind, sounding like an oncoming tornado, knocked over sturdy steel shopping cart corrals in the parking lot with ease. He reported the fury of the storm only lasted a few minutes.

Early this morning I walked along the pathway that follows the north side of the San Diego River. For better than a mile, from Qualcomm Way west well past Mission Center Road, I photographed the aftermath of the terrifying microburst. The amount of damage to the river’s lush canopy of trees was indescribable. Hundreds of trees, large and small, were torn to pieces or uprooted by the brief microbust.

These pics aren’t so cool, but they are interesting…

This sign talks about the history of flooding in Mission Valley, and how nature occasionally flushes out accumulated debris and keeps the river healthy. Because the storm was so brief, nature didn’t create much flooding yesterday–but it certainly created quite a bit of debris!

Tree trimming businesses and city workers converged in full force on Mission Valley today! Many truckloads of branches were hauled off from all over!