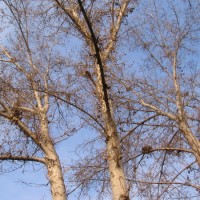 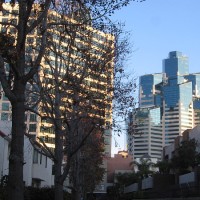 When I catch the trolley at downtown San Diego’s Santa Fe Depot, I often walk through an outdoor passageway that separates the hundred year old train station’s enormous waiting room from it’s original baggage terminal. The latter building was converted years ago into an interesting space used by the Museum of Contemporary Art San Diego (MCASD).

Recently, while strolling through the passageway, I paused to examine three eye-catching graphics created by the museum to promote one of its current exhibitions. Two of the images incorporate old train posters from San Diego history, which I find to be very cool.  I thought you might enjoy a look!

MCASD’s exhibition titled “John D. Spreckels and The Impossible Railroad” concerns a railway project undertaken a century ago by one of San Diego’s most prominent entrepreneurs and benefactors.  Perhaps Spreckels’ greatest accomplishment was to complete the logistically difficult San Diego & Arizona Railroad, our nation’s southernmost transcontinental railroad route.  I haven’t visited the exhibition, but according to what I’ve read it utilizes interesting visual devices to demonstrate the near impossibility of building Spreckels’ railroad, which had to wind around and over deep mountain gorges.  (Spreckels was also responsible for a large network of electric streetcars which traversed San Diego decades before our modern day trolleys.)

I intend to keep this blog non-political. I’m just going post images that look interesting, unusual or visually appealing. Life is full of complexity and surprises.

Well, here’s a poster for an animal rights event that I discovered stuck to a traffic light post in Hillcrest that is definitely unusual! It features a cute farm pig. Perhaps I’ll make it to the event to take photographs of the protesters. That oughta be interesting!

So now I have a picture of a farm tractor and a pig in cultivated Hillcrest. What is the world coming to?