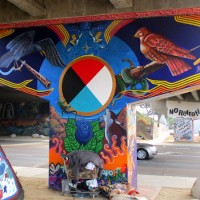 This morning, on my way to catch the trolley downtown, I saw lots of people heading to work by bicycle. Today was Bike to Work Day in San Diego!

I snapped a few photos just for the fun of it. I also took a photo of a cool map showing designated places to bike in San Diego’s downtown and uptown areas. Make copies of it for your own use if you’d like!

Visitors to Old Town San Diego State Historic Park can get a taste of the city’s early history when they step into the First San Diego Courthouse Museum.

One of many free attractions that can be found around Old Town’s central Plaza de Las Armas, the First San Diego Courthouse Museum is a recreation of our city’s first fired-brick structure, built in 1847 by members of the Mormon Battalion.

Other uses for the building would include a meeting place for Masonic Lodge No. 35, headquarters of the U.S. Boundary Commission, office of the San Diego County Board of Supervisors, and a place of worship for San Diego’s first Protestant church.

Come with me inside the museum. Let’s have a peek at a few very small rooms and their fascinating exhibits.

Please enjoy a few photos that I took yesterday as I walked down Broadway past the Edward J. Schwartz United States Courthouse. My eye was attracted by happy, colorful artwork created by children on display in some windows.

These posters were designed by young students last year for 2016 Law Week. They celebrate principles that are enshrined in the United States Constitution.

(I have many blog posts coming up pertaining to this weekend’s San Diego Architectural Foundation OPEN HOUSE 2017 event. A couple of the locations will probably be featured on my Beautiful Balboa Park blog. And it might take me some time to prepare everything. Stay tuned!)

I was walking along San Diego’s waterfront after work today, enjoying what remained of daylight, when I spied some sort of construction underway at the foot of the Broadway Pier. I moseyed over to check it out.

I discovered that the first of the custom pavers are being installed by the Port of San Diego, in the wide new plaza at the pier’s entrance. Anyone can sponsor a paver “brick” and have a name engraved upon it for posterity. Phrases such as “In memory of,” “In celebration of,” “In honor of,” “Sponsored by,” “Established in,” and “Dedicated to” are allowed. Plaques on furniture such as tables, chairs and benches can also be customized with a name of your choosing. A tall stack of pavers was ready to be installed, so it looks to me like the Port of San Diego is off to a good start!

San Diego’s North Embarcadero, often referred to as the city’s front porch, has undergone enormous improvements in recent years. I’ve lived downtown for 15 years, and the waterfront is more beautiful, friendly and functional than ever. But additional phases in its revitalization await completion. According to the Port of San Diego website, money that is raised will help fund future improvements and developments on the Embarcadero.

This unmistakable landmark has been photographed a million times. Now make it a million and one.

Yes, it’s the San Diego County Administration Center. Finished in 1938, designed by several renowned local architects including William Templeton Johnson, Richard Requa and Louis John Gill, the historic building is Spanish Revival/Streamline Moderne in style with Beaux-Arts classical touches.  It stands overlooking the Embarcadero, just across Harbor Drive, not far from the Star of India. For several decades it also served as the Civic Center of San Diego. Today, a large public park is being developed on either side of the building, where parking lots recently existed. I considered posting a photo of the construction, but all you’d see is dirt and bulldozers.

The first two pics are of the building’s east side, which faces downtown’s Little Italy. The other pics from the very similar west side I took during a walk along the Embarcadero on a later day…