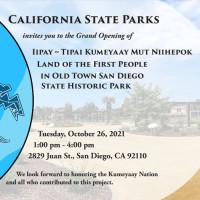 El Campo Santo (which means “The Holy Field” in Spanish) is a small Roman Catholic graveyard in Old Town, nestled between buildings several blocks south of the State Park. It contains a variety of weathered tombstones and crosses marking the final resting places of many early San Diego residents. It is designated California Historical Landmark #68.

Established in 1849, the cemetery reached full capacity in 1880. Today it is a popular attraction for passing tourists.

Nearly five hundred people were buried at El Campo Santo. One of the graves belongs to notorious Santiago “Yankee Jim” Robinson. He stole San Diego’s only row boat, and was hung at the site of the nearby Whaley House.

Supposedly all sorts of ghosts, vapors, hovering torsos, spectral figures and weird apparitions have been seen at this cemetery. And supposedly they set off car alarms along San Diego Avenue.

One ghost is said to be a prostitute who was denied burial. Another is said to be Antonio Garra, a notable Native American. As chief of the Cupenos tribe, Garra led an uprising in 1851 against the people of San Diego due to unfair taxation. When finally captured, he was made to stand beside an open grave and executed by firing squad.

If such ghosts do exist, it seems they have one definite reason to be upset! In 1889 a horse-drawn streetcar line was built right through the hallowed cemetery. In 1942 the tracks were paved over with asphalt, creating the busy roadway. Today, according to a sign by the sidewalk, there are numerous graves directly under the street!