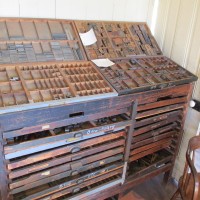 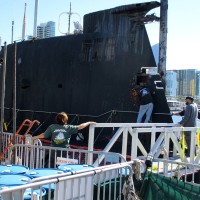 A one-room schoolhouse stands on a hilltop in San Diego’s North County, a very short distance from the beautiful Pacific Ocean. The old schoolhouse is the home of the Encinitas Historical Society, and I paid a visit last Saturday.

The historic schoolhouse, built in 1883, is the oldest building in Encinitas.

While its outward appearance is modest, step through a door and you’ll find the schoolhouse is roomy and welcoming. The wood floors are original. The bright walls are alive with photographs depicting the history of both the schoolhouse and early Encinitas–the residents, town buildings and few landmarks.

In 1883, with the arrival of a family from England, the population of Encinitas swelled to a whopping twenty two. The newly arrived father (a cabinetmaker) and his seventeen-year-old son built the schoolhouse primarily from redwood.

Today, the museum-like schoolhouse contains student desks from the period, but I learned the very first desks, due to lack of funds, were actually irregular things made of cut tree limbs. Slate boards were used for writing and arithmetic. Children who attended the school in those early days of Encinitas came from farms. Some walked as far as two miles.

The history of the schoolhouse is a bit complicated. Over the years changes and additions were made to the structure . . . it was moved in 1928 and became a private residence for half a century . . . it was saved in 1983 by the Encinitas Historical Society and moved back to its original location . . . and finally, it was restored and in 1995 opened to the public.

Visitors who peruse the many photographs and descriptions decorating the schoolhouse walls will feel they’ve travelled back in time. And perhaps to another world.

After looking at many of the displays, I joined a small group that had gathered for a once-every-two-month historical walking tour of Encinitas. I will be blogging about that great tour shortly!

The following photographs are a little of what I saw outside and inside the schoolhouse. To learn much more about this special place, and to perhaps plan your own visit, please check out the Encinitas Historical Society website by clicking here!

One thought on “A visit to the Encinitas Historical Society schoolhouse.”