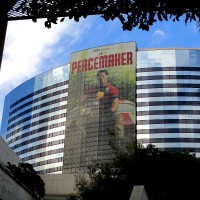 The La Jolla Playhouse has invaded Horton Plaza Park! Several red houses have been placed inside the downtown San Diego park, and inside these tiny houses professional actors and actresses perform. A public audience can freely watch through spy holes!

Model Home is the name of this improvisational performance art concept, and anyone can check it out through Sunday. It’s a part of the La Jolla Playhouse’s annual Without Walls Festival which this year takes place in venues around downtown.

The genius behind Model Home is Mimi Lien, and I believe the idea is to inspire thought about what makes a home, and about those things in a home that individuals deem to be important.

A home is like an enclosed stage where humans act out much of their lives. As one nearby sign says, houses aren’t just structures, but contain human identity, memory and experience. Peering through the various spy holes in these Model Homes is like secretly peering into the mind of another person. It’s an inner life that the observer can never truly know.

I spoke to a couple of friendly La Jolla Playhouse folks and learned the actors and actresses inside the houses perform all day long, with periodic breaks. They are aware that eyeballs are staring in at them, but as trained acting professionals they aren’t fazed at all.

I also learned that at certain times the tiny house that is dangling from a crane is swung around through the air in a Crane Ballet! Perhaps I’ll “swing” by again this weekend and “crane” my neck at what must certainly be an unusual sight!

If you’re in downtown this weekend, you really should check it out!