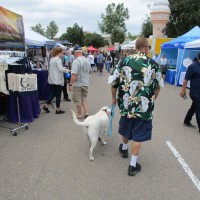 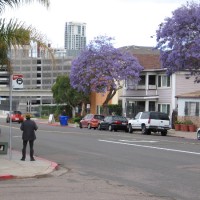 Today, if you were to walk through downtown San Diego’s historic Little Italy neighborhood, you’d probably see a number of very interesting street banners and plaques. These commemorate the Legends of Little Italy.

Early one morning while I walked to a nearby trolley station, I took a few quick photographs along India Street. You might enjoy looking at them. I transcribed much of what appears on the plaques.

The Little Italy Landmark Sign was dedicated and lit at the 7th Annual Little Italy Festa on the evening of October 8, 2000. The landmark sign was constructed as a tribute to this immigrant neighborhood which, until the late 1960s, was the hub of the world’s tuna fishing and canning industry. The nautical theme can be seen in the portholes at the top of the pillars, the blue neon of the lettering and the cable span which holds up the sign. The mosaic tile work on each side of the street tells how this immigrant community is historically tied to the bay, the church and the Italian homeland. This sign is a testament to the preservation of Little Italy’s cultural heritage and to the ongoing revitalization of this dynamic urban ethnic neighborhood in Downtown San Diego.

On March 30th, 1913, in the Little Italy section of Chicago, Francesco Paolo LoVecchio was born. Mother Cresenzia Concetta Salerno and father Giovanni LoVecchio. Both parents from Monreale, Sicily. Frankie’s first introduction to music came when the Monsignor at Immaculate Conception recruited him for the all-boy church choir. Now, an aspiring singer, Frankie would work many jobs, singing wherever and whenever he could, traveling from town to town, experiencing many hardships. Frankie was in his mid-thirties when he attained his first hit “That’s My Desire”. 21 Gold Records followed, including “The Lucky Old Sun”, “Mule Train”, “Jezebel”, “High Noon”, “I believe”, “Cry of the Wild Goose”, “Moonlight Gambler”, and “Rawhide”. Frankie starred in 7 motion pictures, starred in his own television show, sang the title song for several motion pictures, including “Blazing Saddles”, “3:10 to Yuma” and “Gunfight at OK Corral”. Frankie moved to San Diego in the 60’s. He lived the rest of his life in his Point Loma home. Frankie loved San Diego and especially Little Italy. Frankie Laine passed away February 6th, 2007.

Tony Bernardini left his native Bari, Italy to sail to America in 1907. He came with little money, but his heart was full of hope and enthusiasm for the opportunities that awaited him in his New World. Passing through Ellis Island, he quickly made his way to San Diego, where he found a climate and a neighborhood that reminded him of the place he had left. Tony took a job with the San Diego Electric Railway Company, maintaining the tracks for San Diego’s extensive streetcar lines. He worked hard, saved his money, and sent for his future wife, Rosa Monteleone, in 1911.

Tony and Rosa married shortly after her arrival in San Diego. They went on to have seven children; Clara, Fred, Lily, Vito, Matha, Nick, and Angelina. With hard work, Tony was able to bring several other members of their families to America to join them. In the early 1930’s, he got an opportunity to buy the building located on this corner from an acquaintance, who offered to finance the transaction for him. He opened the Civic Center Liquor House. Rosa and all of the children helped him run the business. During the first seven years he ran the business, he was only able to pay the interest on the Property’s note. But with the Declaration of World War II in 1941, San Diego’s economy heated up dramatically. Despite the fact that all three of their sons joined the Army to fight in the War, Tony, Rosa, and their daughters continued to work in the business, and by the end of the War, Tony had managed to pay off the note completely. he had achieved the American dream!

Vincent was born in New York and raised in Naples, Italy. Madeleine was born and raised in Nimes, France. They both came to America for a better life where they met and fell in love in 1922 and later married in 1925. Cooking for friends and family together was a passion they shared, everywhere from the Bronx, New York to West Chester, Pennsylvania. Always in the food business, Vincent was a pasta maker, chef and entrepreneur. In 1948, they finally settled in San Diego, California and opened Cash & Carry Italian Foods, a labor of love. Their strong work ethic, values, and generosity helped shape the budding Italian-American community. With the help of seven children and Madeleine’s infectious laugh, the small business grew to Filippi’s Pizza Grotto, the success story we all know today. Their children Roberto, Gina, Mary, Vincent, Alfred, Richard and William followed in their parents footsteps and grew the family business. Today the tradition continues with their grand and great grandchildren.

During another walk through Little Italy I discovered another fascinating plaque: 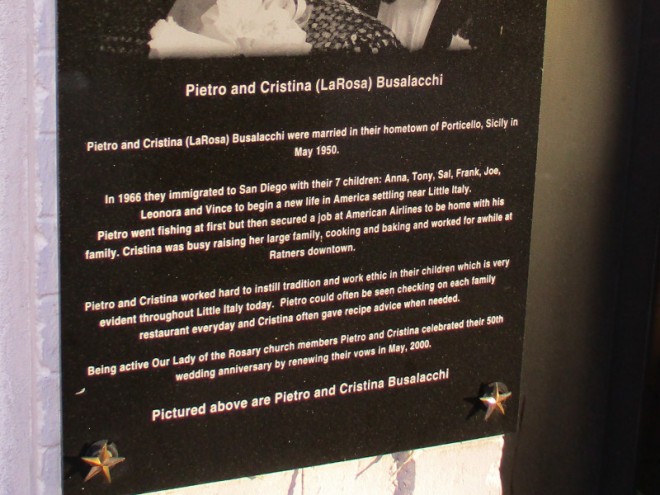 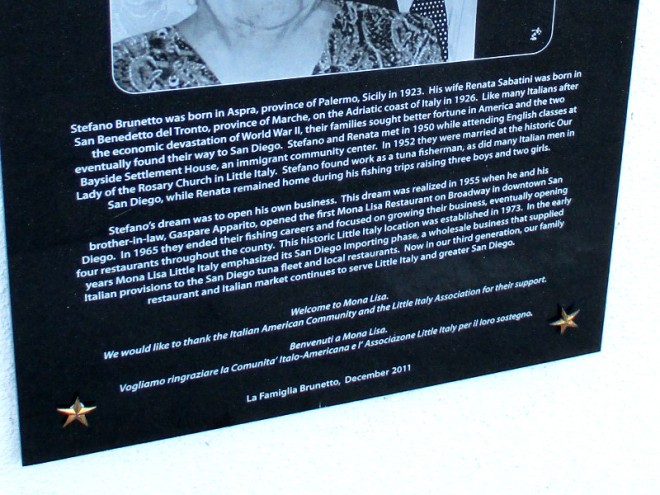 3 thoughts on “Legends on the streets of San Diego’s Little Italy.”