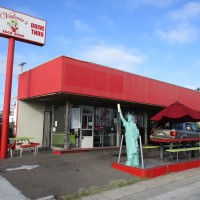 While walking to the Fifth Avenue trolley station yesterday morning, I passed the window of the Donut Bar on B Street. They’d just filled it with the day’s freshly-baked yummy treats and were preparing to open for business. I almost began to drool right there on the sidewalk!

The Donut Bar is frequently listed as one of the top doughnut shops in the entire country!  Wow!

Thought you’d like to have a peek! Good morning!

Look at this bonus pic!