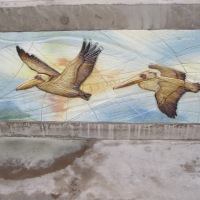 The holidays must be near in San Diego, with Balboa Park’s December Nights right around the corner. Because look what I saw today!

I was told Santa and his reindeer will be showing up soon, too! (With a little help from City of San Diego Parks and Recreation.)

It was a bit odd to see life-size Biblical figures wrapped up in plastic. A shepherd was lying down nearby, after having “surgery” on his hand. It had been broken last year when some member of the public tore away his staff. Whatever your beliefs might be, that’s pretty sad.

The San Diego Community Christmas Center is a non-profit committee that maintains an over half century old tradition. According to their website, the Chamber of Commerce first initiated the project after World War II. Horton Plaza was first to display the Biblical figures. The next home for the Nativity Scene was the Civic Center on Pacific Highway. Finally, in 1953, the location was moved to its present home in the Organ Pavilion in Balboa Park…

I post new blogs pretty often, so you might want to bookmark coolsandiegosights.com and check back from time to time.

You can explore Cool San Diego Sights by using the search box on this website’s sidebar. Or click a tag! There’s a lot of stuff to share and enjoy!