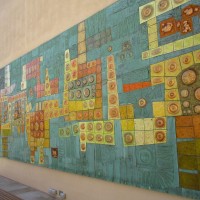 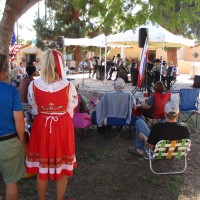 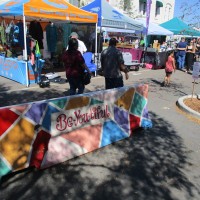 This afternoon I attended Antonio Garra Day in Old Town San Diego State Historic Park. The event, which comes on the anniversary of Garra’s death, was organized by the Pala Band of Mission Indians. I listened to several speakers, including authors and historians, talk about Garra and historical events in the mid-1800s, and I watched different Kumeyaay groups perform Bird Songs and Dances.

Antonio Garra was a leader of the Cupeño people in Southern California who sought to organize tribes of our region to resist unfair taxation. Even though Native Americans were not citizens of the United States, a tax was levied upon their animals, property and agriculture. This taxation without representation was considered by many fair-minded people to be illegal and unjust.

Garra was educated at Mission San Luis Rey and could speak English, Spanish and Latin. He was an influential leader who opposed the ill-treatment of indigenous people. According to Wikipedia: “In 1851, because of several issues of conflict, Antonio Garra, a Cupeño from Warner’s Ranch, tried to organize a coalition of various Southern California Indian tribes to drive out all of the European Americans. His Garra Revolt failed, and settlers executed Garra. The Cupeño had attacked Warner and his ranch, burning some buildings.”

Garra was blamed for the murder of four people at Colonel Warner’s Rancho on November 22, 1850, and he was sentenced to be executed. On January 12, 1852, he was brought to the El Campo Santo cemetery in Old Town and told to kneel down beside a ready grave in front of a firing squad. He last words were: “Gentlemen, I ask your pardon for all my offenses and expect yours in return.”

Antonio Garra Day arose because of a Wanted poster that has long been displayed in the First San Diego Courthouse museum. The poster does not provide the full story of the Garra Uprising and the suffering of indigenous people. Today, a plaque beneath the poster provides more historical context.

Between performances of Bird Songs, which honored Native American ancestors, elders and Garra, I listened to the words of Patricia Nelson. She is a descendant of Antonio Garra. As a youth she was incensed by the cruel treatment of her people. Today, she works to honor and proudly remember those people, their culture, their lives and humanity.

Antonio Garra Day has grown over the past 4 or 5 years, and next year it will be a much larger event, filling the plaza of Old Town San Diego State Historic Park, with many Kumeyaay participants from all around our region.