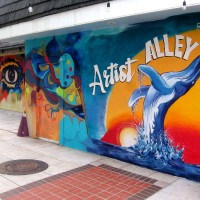 A thought-provoking historical exhibit is currently on display in downtown San Diego’s Central Library. Titled “Lincoln: The Constitution and the Civil War,” the large multi-paneled exhibit outlines and discusses a number of controversial issues that arose during the time of America’s Civil War. The exhibit, which has visited a number of different libraries, was created by the American Library Association and the National Constitution Center.

Old photos and texts help visitors to understand the election of Abraham Lincoln, the secession of the southern states, and the Civil War itself; complex topics that are explored include slavery and the plight of African Americans, the Constitution and state sovereignty, and civil liberties.

If you happen to find yourself in East Village, pop into the library. The large display is on the ground floor and very difficult to miss. The traveling exhibit will remain at this location through January 9, 2015.