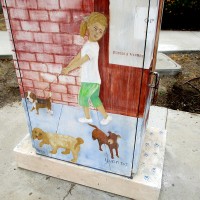 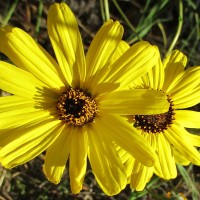 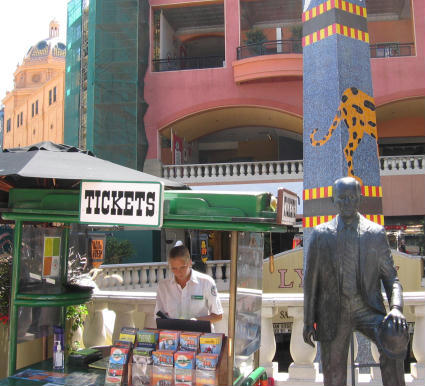 The lady in this ticket booth in front of Horton Plaza seems unconcerned that a dark silent person looms ominously beside her! That person, in the form of a statue, is Ernest Hahn.  He’s a famous San Diego developer and the driving force behind the popular Horton Plaza shopping mall.

What you see in the first pic is a colorful scene near the entrance of Horton Plaza. An obelisk with a tile mosaic juts out of the underground entrance to the Lyceum Theater, which is home of the San Diego Repertory Theatre. The domed building in the upper left corner of the photograph belongs to the Balboa Theatre.

Across from the statue of Ernest Hahn is a bronze representation of Alonzo Erastus Horton, a gold miner, shop owner, and finally an influential real estate developer in the second half of the 19th century. He purchased cheap land for development adjacent to San Diego Bay where ships docked, well south of the established settlement below the old Spanish presidio.  Alonzo Horton’s New Town had supplanted Old Town in importance by the beginning of the 20th century.

The third statue stands a bit to the west, on the other side of Horton Square. You can find it in the shade of a tree. The figure is Pete Wilson, who served as San Diego mayor from 1971 to 1983. He went on to serve as United States Senator and governor of California.