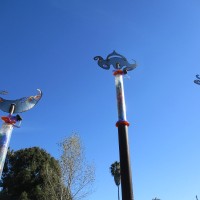 When you walk randomly through a city, you encounter unexpected mysteries.

The other day I was walking through Balboa Park, west of the Cabrillo Bridge, when strange, tiny mysteries greeted my eyes. Down in the concrete sidewalk were a few dozen scattered leaf impressions.

I found them on the north side of El Prado, west of Balboa Drive, in the vicinity of the Sefton Plaza statues of Balboa Park’s founders.

Did leaves falling on fresh new concrete produce these impressions? The impressions seem too deep for that.

What’s more, many of the leaf shapes don’t appear to match any of the nearby trees or vegetation.

Were these mysterious impressions produced naturally or deliberately?

Stamped in the concrete sidewalk a short distance to the west, at Sixth Avenue, is the year 1968. Perhaps that’s a relevant clue.

What do you think? Does anybody know?