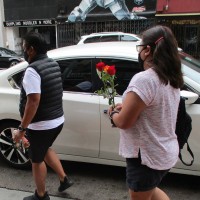 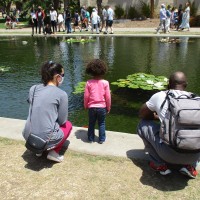 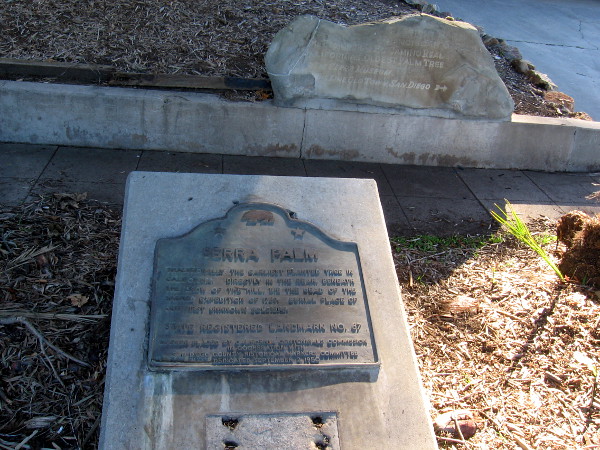 Several historical markers can be found near the northwest entrance to Presidio Park. If you’ve ever driven along Taylor Street just past Morena Boulevard and the Presidio Recreation Center, you might’ve glimpsed them. They stand beside a sidewalk that comes to an abrupt end, in a place where almost nobody walks.

The three markers were placed years ago near three sites of historical importance: the Serra Palm, Derby Dike, and the La Playa Trail.

I’ve transcribed the words on each plaque.

I was told by a park ranger who happened to be parked nearby that the Serra Palm is long gone. He said it was probably blown over in a windstorm, and pointed out a pine tree that was toppled by our most recent storms.

The Serra Palm was planted in 1769 by Padre Junípero Serra, and marked the beginning of El Camino Real.

According to Wikipedia: “In 1934, six commemorative terra cotta plaques were placed along the length of the trail by the local chapter of the Daughters of the American Revolution and other groups, based on a relief designed by sculptor Rose M. Hanks. The original six were located at Mission San Diego de Alcala; at the foot of Presidio Hill in Old Town; near the intersection of Rosecrans St. and Midway Blvd. in the Midway area; at the corner of Rosecrans and Lytton streets in Loma Portal, across from the Naval Training Center San Diego golf course; at the corner of Rosecrans and Byron streets in Roseville; and at the site of the fuel depot at Naval Base Point Loma…” 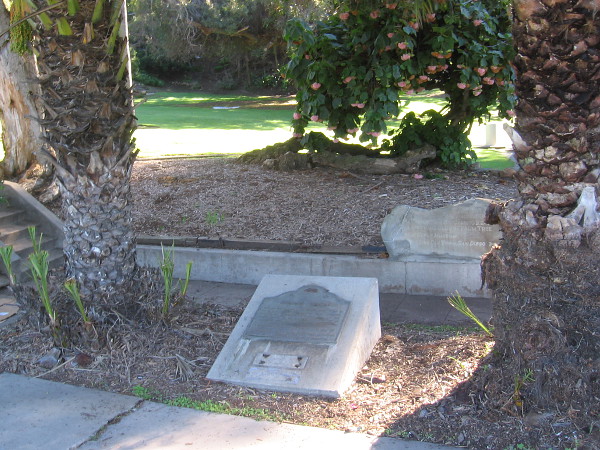 TRADITIONALLY THE EARLIEST PLANTED TREE IN
CALIFORNIA. DIRECTLY IN THE REAR, BENEATH
THE BROW OF THE HILL, LIE THE DEAD OF THE
SACRED EXPEDITION OF 1769, BURIAL PLACE OF
OUR FIRST UNKNOWN SOLDIERS.
STATE REGISTERED LANDMARK NO. 67
MARKER PLACED BY CALIFORNIA CENTENNIALS COMMISSION
IN COOPERATION WITH
SAN DIEGO COUNTY HISTORICAL MARKERS COMMITTEE
DEDICATED SEPTEMBER 2, 1950

UNTIL 1853 THE ERRATIC SAN DIEGO RIVER DUMPED TONS
OF DEBRIS INTO THE HARBOR OR POURED INTO FALSE
BAY, NOW MISSION BAY. AT TIMES IT THREATENED TO DE-
STROY OLD TOWN SAN DIEGO. LIEUTENANT GEORGE
HORATIO DERBY, U.S. TOPOGRAPHICAL CORPS, BUILT A
DIKE THAT DIVERTED THE WATERS INTO FALSE BAY. THIS
WAS THE FIRST EFFORT TO TAME THE RIVER, AND ONE
OF THE FIRST U.S. GOVERNMENT PROJECTS IN CALIFOR-
NIA. THE RIVER WAS NOT FULLY HARNESSED UNTIL THE 1950s.
CALIFORNIA REGISTERED HISTORICAL LANDMARK NO. 244
FIRST REGISTERED JUNE 10, 1936. PLAQUE PLACED BY THE
STATE DEPARTMENT OF PARKS AND RECREATION IN CO-
OPERATION WITH THE SAN DIEGO DEPARTMENT OF PARKS
AND RECREATION AND SQUIBOB CHAPTER, E CLAMPUS
VITUS, AUGUST 4, 1990.

One thought on “Historical markers at entrance to Presidio Park.”