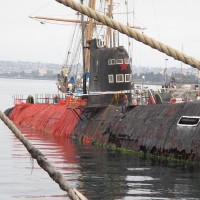 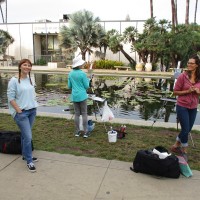 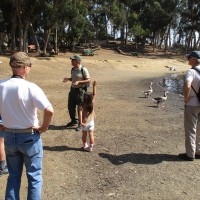 Several days ago an astonishing 5750 pound bronze statue, created in 1735 by Takumi Obata, was installed by crane at the Japanese Friendship Garden!

I must apologize, because up until now I have been referring to the new statue as a Great Buddha. After seeing the magnificent sculpture firsthand today, and reading more about it, I’ve learned that it’s actually a kannon statue, representing Kannon Bosatsu, a Buddhist goddess of mercy that is popular in Japan. The deity is called Guanyin in other parts of Asia, and has its origin in India in the 1st or 2nd century.

Originally this Kannon Bosatsu was located at the Middlegate Japanese Garden in Pass Christian, Mississippi. When Hurricane Katrina destroyed that garden, the damaged statue was acquired by Mr. and Mrs. Gabrych, who later donated it to San Diego’s Japanese Friendship Garden in Balboa Park.

A second statue that was donated to JFG also was installed several days ago. The large guardian deity stands in the Upper Garden, opposite the bonsai collection. I’m told that less is known about the exact history of this particular sculpture. I believe it represents Kongorikishi, one of the two Nio guardians of Buddha who stand at the entrance of many Buddhist temples.

Enjoy these photos, then head over to the Japanese Friendship Garden in Balboa Park for the full experience!

To see photos that I took as the stream and observation platform were under construction, click here.