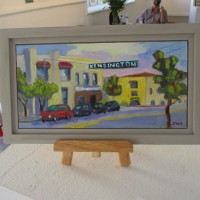 I’d like to bring two talented artists to everyone’s attention. I met them during my walk around San Diego yesterday. They show their colorful works of art on the sidewalk. I had spoken to Carlos several times in the past; I spoke to Juli for the first time and learned a little of her story.

Carlos hangs out next to the Star of India, right near the ship’s figurehead. He usually has a whole array of stone and wire creature creations on display. Many of them are antlike. They’re all a lot of fun.

Yesterday he had something absolutely amazing on the sidewalk. You can see it in my first two photographs. He has made several such figures using resin, acrylic, and in this case some some quartz crystals. I looked very closely at his Eagle Warrior and was completely blown away. To me, this piece appeared to belong in an art gallery!

Carlos is very friendly and interesting, with many wise things to say about life and the world.  He has lived in San Diego for a long, long time.  If you happen to walk along the Embarcadero, and you see some art on the sidewalk that matches what I have described, you’ve probably found him! Say hello!

And now, a small colorful work of art by Juli:

At times I have seen Juli along the Embarcadero, painstakingly using a small brush to paint her fantastic crystal-like watercolor creations. But yesterday I spoke to her for the first time. She was hanging out on the sidewalk just south of the Santa Fe Depot. Take a look at her work!

Juli is quite knowledgeable about the art scene and has travelled all around the country. Many of her friends and acquaintances know her as Tree. She recently came down to San Diego from San Francisco, and is working to recover from a difficult situation. Her attitude is of unbounded optimism!

If you’re ever walking about San Diego and you spy her small but very distinctive works of art, take a close look! They’re pretty amazing!

I live in downtown San Diego and love to walk around with my camera! Sometimes I meet really interesting people! You can follow Cool San Diego Sights via Facebook or Twitter!

Are you a blogger? Do you want to help others and make the world a better place? You might want to join Bloggers Lifting Others Generously.

4 thoughts on “Two talented artists on the streets of San Diego.”