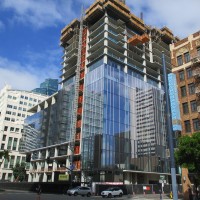 A few weeks ago I meandered about Inspiration Point in Balboa Park. Walking slowly, pausing often, going nowhere in particular. Just seeing what I might see.

At the south edge of the Balboa Park Administrative Courtyard, I stood and gazed down the hill toward a corner of downtown San Diego. You might remember my blog about the courtyard. It’s a place that very few people know about. It’s peaceful, green, a bit of heaven. A place of solitude.

As I stood, I glanced down some steps leading toward a seemingly unremarkable patch of trees. A dusty lot next to the trees contained dozens of parked city Park and Recreation trucks. I wondered to myself if the public was permitted to walk down those steps, into what appeared to be a city work area.

Then I saw the blue among the trees. Was that water?

No sign indicated I couldn’t investigate. So I did.

And what I found took my breath away.

The trees seemed a forgotten oasis. At their center shined a lonely pool and a small fountain in the form of a child. The cherub seemed to be holding open the mouth of a carp, or perhaps reading a book–I don’t know.

The strange fountain appeared to occupy a magical place, entirely removed from the surrounding world.

An email to the Friends of Balboa Park, an organization whose office is in the nearby Balboa Park Administration Building, provided a bit of information.

The person who replied parks her car in the lot not far from the pool and fountain, and she was completely amazed. She’d didn’t know of its existence.

Ranger Kim, who also works in the building, and who knows volumes about the history of Balboa Park, indicated that the fountain was left over from the 1920’s when the U.S. Navy built a large hospital campus in the immediate area.

In the 1980’s, the land was given to the city in exchange for acreage in Florida Canyon, where the new Naval Medical Center San Diego was built. The buildings from the 1920’s were eventually demolished, except for a Navy chapel, the administration building and its stately courtyard, and a nearby medical library and auditorium building. Today the chapel contains the Veterans Museum and Memorial Center; the administration building contains Balboa Park’s headquarters.

And, of course, magic remains where very few people go: a small fountain that healed spirits at the old Navy complex. A beautiful, hidden fountain forgotten by time.

30 thoughts on “A beautiful, hidden fountain forgotten by time.”